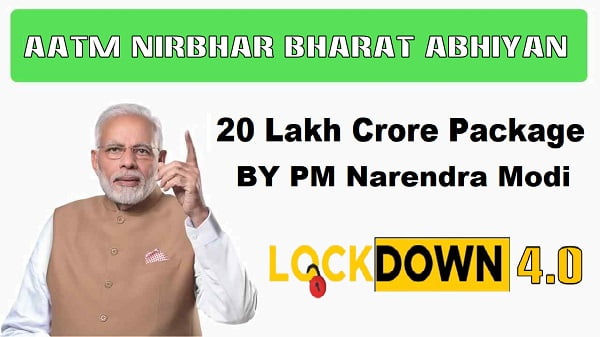 Due to the Corona Virus epidemic in the country, on 12 May 2021, PM Modi has addressed the country and launched Aatm Nirbhar Bharat Abhiyan 2021 (Self-reliant India Campaign 2021) for the citizens of the entire country.

As you all know that the entire country was under lockdown on 12th May 2021, to deal with the troubles caused by it, the Modi government had announced a relief package of 20 lakh crores for the citizens, which was 12 from the last time. times more.

Initially, the Modi government had announced a Relief Package of Rs 1.70 Lakh Crore Rupees under PM Garib Kalyan Yojana, which was very low, but this time the government has announced a very large package in view of the loss of lockdown.

This package has been released under Aatm Nirbhar Bharat Abhiyan Yojana, which will help the poor people in the country to fight Corona Virus, this government’s package was implemented with full details by Finance Minister of our country on 13 May Will go

PM Narendra Modi said in his address to the nation, the announcements made by the government regarding Covid-19, RBI’s decision and today’s package Aatm Nirbhar Bharat Abhiyan worth 20 lakh crore rupees, which is the largest package ever. Is about 10 percent of our country’s GDP

Addressing the nation for the fifth time since March, the Prime Minister said that the path to Indian economic revival is self-sufficiency. PM Modi said that the financial package would help revive every branch of the economy – from demand, supply chain to manufacturing.

The self-sufficient Bharat Abhiyan economic package will help cottage industries, home industries, small scale industries, MSMEs, which are the means of livelihood for crores of people. And with this, Prime Minister Modi said that this package is also for those farmers who pay their taxes on time in different weather conditions and for the middle class.

The Prime Minister also urged people to buy and promote local products and brands. And with this, he urged all the Indian people to be ‘vocal for the local’ which means more and more of their local items, that is, use foreign goods except foreign goods.

Modi ji said that time has taught us that we should make ‘local’ the mantra of our lives. The global brands today were once local as well, but when people started supporting them, they went global. That is why every Indian should be vocal for local from today.

Prime Minister Modi has also mentioned Lockdown 4.0 in his speech and he has prayed for people to die in their homes and follow social distancing more and more and use masks.

During his speech, the Prime Minister did not give details of how long the next phase of lockdown will be extended in India. He merely said that the information will be made available on 18 May based on the input of the states.

That is, only after the end of lockdown 3.0, some new news can be seen on lockdown 4.0 for the moment, no official news about the lockdown has been released by the government. In his speech only Modi ji self-sufficient India campaign Plans announced

Under which he has announced a relief package of Rs.20 Lakh Caror for all the citizens of the country, which will help all the people of the country to get some help in dealing with the Covid-19 epidemic.

5 basic pillars have been suggested by Prime Minister Narendra Modi for the development of Atmanibhar Bharat Abhiyan 2020. All these five columns are as follows:

Beneficiaries of a self-reliant India campaign