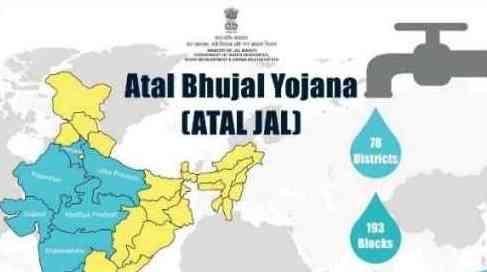 Prime Minister Shri Narendra Modi has started the Atal Bhujal Yojana (Water Conservation Plan). The existing condition of many water bodies of the country will be improved through this scheme. Atal Bhoojal Yojana will help raise the level of groundwater to meet the needs of the agricultural sector.

The central government has budgeted to spend Rs 6,000 crore to successfully implement this mega project. Atal Bhoojal Yojana will first be implemented in the identified areas in Gujarat, Haryana, Karnataka, Madhya Pradesh, Maharashtra, Rajasthan and Uttar Pradesh in 5 years.

However Central and State Government schemes such as MGNREGS, PMKSY, State Schemes etc. have been successful in replenishing groundwater resources to some extent and as a result, the groundwater level has increased in some areas of the country. This Atal bhujal Scheme will be implemented over a period of five years from 2020-21 to 2024-25.

Atal Ground Water Scheme (ATAL JAL) is a central sector scheme to facilitate sustainable groundwater management with an outlay of INR 6000 crores. Of this, INR 3,000 crores will be in the form of contributions from the World Bank and INR 3,000 crores from the Government of India.

This Atal Bhujal Yojana emphasizes community participation and calls for side intervention for sustainable groundwater management in identified water areas in seven states of the country. It envisages better source sustainability for the Atal Bhujal Yojana Jal Jivan Mission, positively contributes to the government’s goal of ‘doubling farmers’ income’ and enhancing behavioral changes in the community to facilitate optimal water use.

Under Atal Bhujal Yojana, states will be assisted in the form of grants. The World Bank will be financed under a new lending instrument, namely Programs for Results, under which funds under the scheme are based on the achievement of results promoted from the World Bank to the Reserve Bank of India for participating states. Will be given for disbursement.

The scheme is being taken up in 8353 water gram panchayats of Haryana, Gujarat, Karnataka, Madhya Pradesh, Maharashtra, Rajasthan, and Uttar Pradesh. The details of the area identified for implementation of the scheme are given below: –

Need – Due to widespread exploitation across the country the ground water level has come down to its lowest level in recent years. The government has planned this scheme for conservation of water bodies, which is a matter of concern for the authorities.

Benefits – This scheme will help revive the water bodies. In addition, groundwater levels will also improve, especially in rural areas.