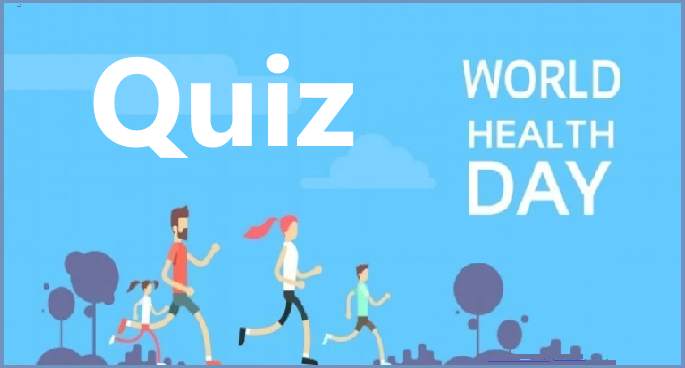 World Health Day is a global health awareness day celebrated on 7 April every year under the sponsorship of the World Health Organization as well as other related organizations. In 1948, the WHO organized the First World Health Assembly.

How To Participate In This Quiz

Choose the Correct pair of Past themes of World Health Day?

Ans: All the above

Every year on 7 April, the World Health Organization (WHO) celebrates its anniversary, the day its Constitution came into force. How old will WHO be this year (2018)?

Ans: All the above.

How much of the world’s population is not able to obtain the health services they need?

Ans: At least 50% of the world’s population

Who has a part to play in advocating for universal health coverage?

Ans: All of the above

World Health Organization was established in__________?

When did WHO reported that smallpox had been eradicated worldwide?

The epidemic helped forge the American two-party system. In Philadelphia, as the death toll mounted, Federalists accused Democrats of a biological terror campaign.

WHO has how many member nations?

In February 1692, in the Massachusetts village of Salem, eight young women accused their neighbors of witchcraft. Some historians blame the hysteria on a viral fever spread by insects and birds.

Which of the following statement is/are correct about Favipiravir?

Ans: All the above are correct

How many countries, areas or territories are suffering from novel coronavirus outbreak in the World?

The Union Minister for Health & Family Welfare of India

“We are fighting a disease, not people,” said Surgeon General C. Everett Koop. Americans would have to learn not to scorn a population of victims not exactly considered mainstream.

Scientists blamed stressed-out bats and their habitat loss for this 21st century pandemic.

Ans: All of the above

The bubonic plague anticipates nuclear winter in this brooding stylized film about a knight’s encounter with death upon his return from a holy crusade.

Missionaries, it was alleged, had treated this virus with strychnine.